MOST POPULAR IN ENVIRONMENT 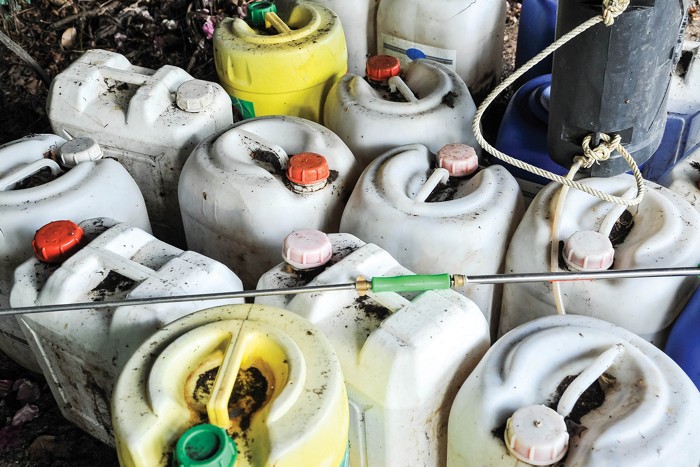 High-density polyethlyene containers treated with fluorinated compounds can leach PFAS into pesticides and other liquid products, a study by the US Environmental Protection Agency suggests.

Plastic containers made of fluorinated high-density polyethylene (HDPE) are likely to leach per- and polyfluoroalkyl substances (PFAS) into pesticides and other liquid products that are stored in them, results from the US Environmental Protection Agency suggest.

The data, released Sept. 8, show that the amount of PFAS that migrates into liquid products increases with storage time.

PFAS are a family of thousands of highly persistent synthetic chemicals that are widely used in society, from industrial applications to stain-resistance on clothing. Some are toxic, but the safety of many others has never been studied.

The EPA has been investigating the presence of PFAS in pesticides since late 2020, when the persistent molecules were detected in mosquito sprays applied aerially in many US states. In early 2021, the agency suggested that PFAS, formed when the containers were subjected to fluorine gas to make them sturdier, had migrated from the HDPE into the liquid pesticides.

In the latest study, the EPA examined the potential for three different brands of fluorinated HDPE containers to leach PFAS into water and methanol over time. The liquids served as surrogates for pesticides. The agency did not disclose the names of the container brands.

The EPA detected 8 out of 31 PFAS targeted in the analysis in both water and methanol stored in the fluorinated containers, indicating that PFAS migrated from the container walls into the liquids. The amount of PFAS varied by container brand, but in all cases increased gradually with storage time over 20 weeks. The agency detected higher levels of PFAS in methanol than in water.

But even in water, the EPA found parts-per-billion levels of PFAS. Earlier this year, the agency set health advisory limits for two of the most toxic PFAS—perfluorooctanoic acid (PFOA) and perfluorooctanesulfonic acid—in drinking water at less than a part per trillion. PFOA was one of the 8 PFAS—all carboxylic acids—detected in the testing.

The EPA is asking pesticide makers to analyze their products for PFAS and remove those that are contaminated from the market.

“Relying on industry to self-report is problematic,” says Kyla Bennett, Director of Science Policy at the Public Employees for Environmental Responsibility, a watchdog group that raised the alarm about PFAS in pesticides in 2020. “Given the potential for harm, EPA should be doing more,” Bennett says.

The agency should require companies to test their products for PFAS and submit results, and it should ban the use of fluorinated containers, especially for food products and pesticides sprayed on food, she adds.

The US Food and Drug Administration is determining the extent to which fluorinated HDPE containers are used in food contact applications.